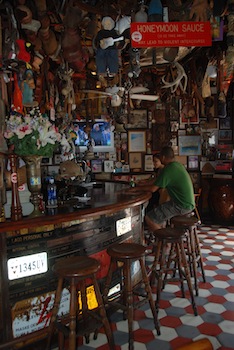 I can’t claim that I’ve seen every World Cup game this year, so I won’t even try. We’re a couple weeks away from the final game, and I’m already lamenting how I’ll miss waking up to soccer, drinking coffee to soccer, or working while a game is on. The vuvuzelas make it all that much better.

During TBEX10, a travel blogger conference that I attended in New York this past weekend, game updates were streamed onto the screen. Yesterday, while flying to Aruba, I was able to watch TV (for free!) on the plane. So where did I watch part of the Paraguay v. Japan game today? At Charlie’s Bar in San Nicolas, Aruba. 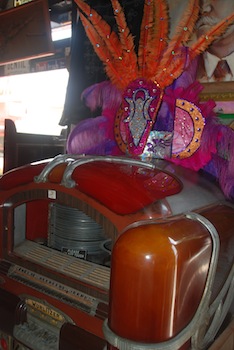 Charlie’s was founded in 1941, and sailors made up its early clientele. Nowadays, it’s filled with memorabilia—from paintings to license plates to funky museum-style items. Stop here for a cold beverage, and you could spend hours looking around. But stop here during the World Cup, and both TVs are on the game. There was plenty of room in the bar, which made it easy to look around and find fun items, like a feather headdress on a Wurlitzer jukebox.

With the quarterfinals beginning, I’ll be catching every game I can, even though it’ll be a struggle while I’m on the road again next week. But so far, the most interesting World Cup venue I’ve found is Charlie’s.

I was in Aruba as a guest of the Aruba Marriott Resort & Stellaris Casino, but the opinions in this article are my own.

How are you holding up? We're eight months into the pandemic in the United States, and many aspects of our lives have … END_OF_DOCUMENT_TOKEN_TO_BE_REPLACED

As quickly as it came, summer’s nearly gone. While I’d love to say I’m finally coming up for air from a hectic period of … END_OF_DOCUMENT_TOKEN_TO_BE_REPLACED

Summer Solstice was just yesterday, and yet it feels as if it's been summer for a while now. At least, I've been … END_OF_DOCUMENT_TOKEN_TO_BE_REPLACED