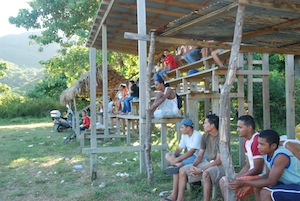 World Cup games are winding down, with only four teams left. It’s always at this point in the World Cup when I become concerned about the lack of decent soccer footage on TV once the big competition is over. Sure, I could watch the occasional U.S. game, or the highlights of the European league, but I really crave Latin American fútbol.

As much as I wish that the Honduras team made it past the first round this year, I’m extremely proud that the team made it to the World Cup at all—for the first time in 28 years. And with three players from the same family on the team, Honduras has made a mark in World Cup history.

Away from the tiny TV screen, I’d certainly love to attend a match in a huge stadium with blaring vuvuzelas. But island-style soccer on Guanaja is significantly more laid-back. 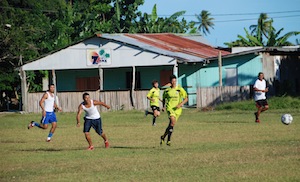 The Mangrove Bight team plays on the soccer field in Mitch, a town that got its start after Hurricane Mitch in 1998, when many people rebuilt after losing their homes. There’s no fancy seating, or vendors to bring you food and drink. On the other hand, nobody frisks you and takes away the snacks and beverages you bring. So, there’s that.

Our local team doesn’t have shiny matching uniforms like some others do. See the bright yellow outfits in the photo? That’s the visiting team.

Ultimately, the distractions of pretty jerseys and grand stadiums don’t really matter. What does matter is the game and the fun for both players and spectators. Old-school soccer suits Guanaja. And if some day, one person shows up with a vuvuzela, I won’t mind at all.

How are you holding up? We're eight months into the pandemic in the United States, and many aspects of our lives have … END_OF_DOCUMENT_TOKEN_TO_BE_REPLACED

As quickly as it came, summer’s nearly gone. While I’d love to say I’m finally coming up for air from a hectic period of … END_OF_DOCUMENT_TOKEN_TO_BE_REPLACED

Summer Solstice was just yesterday, and yet it feels as if it's been summer for a while now. At least, I've been … END_OF_DOCUMENT_TOKEN_TO_BE_REPLACED