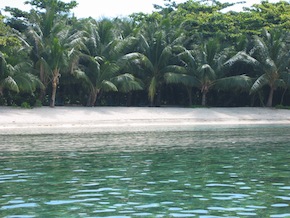 Even the shortest trip can teach us lessons about differences in culture, valuable things to have on hand, or even the best way to live your life once you return. One of the more interesting lessons I’ve learned during the past few years of traveling to Honduras is how some of the side effects of the drug trade are rather nuanced. For example, what happens when drug traffickers suspect authorities are on their trail and they dump their bricks of cocaine overboard? Is that the end for that particular shipment?

First, I have to say that I’ve never seen a brick of cocaine, except on TV, so there are limits to what I know. But apparently, the high-tech era has come to this industry as well. GPS devices are wrapped in some of the waterproof packing, and once the bricks are dumped overboard, the drug runners can find where they eventually end up—often washed on shore anywhere between Colombia and the United States.

Folks I know in the Bay Islands call the washed-up bricks of cocaine square grouper, and it’s understood that if you find any, you can bring the grouper to certain people in the community, who will then pay you a finder’s fee of sorts. This gets their product back, and it encourages locals to participate in a way: Rather than turn the drugs in to the authorities and possibly getting fingered as a participant, play it quiet and get a reward you can spend.

Certainly, there are bigger issues with the illegal drug trade, but the islanders’ views aren’t solidly black or white—an issue I covered in my article in World Hum this week: Square Grouper on the Cocaine Coast. And while we may all have views on whether drugs should be legalized or the current “War on Drugs” should continue, learning about this particular side effect has given me an insight I likely wouldn’t have gotten by staying at home.

How are you holding up? We're eight months into the pandemic in the United States, and many aspects of our lives have … END_OF_DOCUMENT_TOKEN_TO_BE_REPLACED

As quickly as it came, summer’s nearly gone. While I’d love to say I’m finally coming up for air from a hectic period of … END_OF_DOCUMENT_TOKEN_TO_BE_REPLACED

Summer Solstice was just yesterday, and yet it feels as if it's been summer for a while now. At least, I've been … END_OF_DOCUMENT_TOKEN_TO_BE_REPLACED