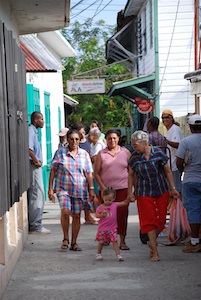 The first time I visited Guanaja, I’d read a guidebook before my trip. Guanaja’s main town, Bonacca, is on a cay just a short distance from the main island. The guidebook reference to the town (also known as “the Cay”) as the “Venice of the Caribbean” conjured an image in my mind, and I was eager to see it during my island travels.

It turns out that the nickname referred only to the canals through Bonacca, and not much else. At the time of that first trip, while I enjoyed meeting islanders in local bars and grocery stores on the Cay, I quickly learned to avoid looking in those canals. The seawater sloshed around, thick with garbage—from plastic bottles to Styrofoam. It made me wonder if the person who coined the nickname had done so well before the canals were choked with trash, or if he had come up with it after a long drinking jag.

A few years ago, the canals were cleaned up. Now, I don’t mind getting a glimpse of the water as I walk over the bridges and walkways on the Cay. Sure, there’s the occasional plastic bottle, but nothing like it was before. I can actually see through the water now, rather than a swirling mass of trash.

Nowadays, traveling to the Cay is on my list of necessities. While I can shop for some groceries in Mangrove Bight or Savannah Bight, Bonacca has a more thorough selection. Also, it’s the best place on the island for hardware and building materials. The bank? That’s on the Cay too. Any municipal tasks, like getting permits or paying taxes, have to be done there as well.

That said, I often enjoy walking up and down the main thoroughfare on the Cay. It’s only a pedestrian walkway, and just 7 feet wide. From there, I can tell who’s around, as I pass hardware stores, grocery stores, bars, small restaurants, the bank, the basketball court, an internet café and the bottle depository. There are neither street signs nor addresses. If I’m looking for something, I’ll be given directions based on what it’s next to.

Recently, while I was shopping in Casa Sikaffy, one of Guanaja’s largest grocery stores (that’s smaller than your average 7-Eleven), the lights suddenly went out. First thought: power outage. Nope. The owner’s sister walked up to me and explained, “There’s a funeral, and the body just passed in the street outside, so we turned the lights out for respect.” Yes, the street she was referring to was Main Street, Bonacca. Things are front and center here. Good luck keeping secrets.

How are you holding up? We're eight months into the pandemic in the United States, and many aspects of our lives have … END_OF_DOCUMENT_TOKEN_TO_BE_REPLACED

As quickly as it came, summer’s nearly gone. While I’d love to say I’m finally coming up for air from a hectic period of … END_OF_DOCUMENT_TOKEN_TO_BE_REPLACED

Summer Solstice was just yesterday, and yet it feels as if it's been summer for a while now. At least, I've been … END_OF_DOCUMENT_TOKEN_TO_BE_REPLACED