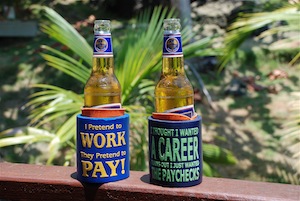 In Honduras, often the best choice for happy hour is rum or beer. That doesn’t pose a problem for me, since I like both perfectly well. But cerveza drinkers on Guanaja have a few options, so let’s review them:

Salva Vida. Perhaps one of the best-named beers, salva vida means “lifesaver” in Spanish, and if you don’t remember that, you’ll be reminded by the lifesaver image on the brown bottle’s label. It’s a perfectly fine lager, perhaps nothing to write home about, but it’s one of my two favorite beers I find on the island.

Imperial. Another lager, this beer with the eagle label is more available on the mainland (especially in Tegucigalpa) than on Guanaja. But when I find it on the island, I’ll often have one.

Port Royal. For fans of pilsner beers, this is your go-to on Guanaja. It’s named after a town on Roatán that was once the site of Engligh pirate camps. Port Royal and Salva Vida are the most popular cervezas to choose here.

Barena. Akin to Corona, it’s in a clear bottle with a palm tree label and has a light flavor. On the hottest days, this is my first choice.

At our friends’ house on Guanaja, there are a few koozies to keep the beers cold. My favorite one, and the one I grab every time, has this printed on its side: “I thought I wanted a career. Turns out I just wanted the paychecks.” I couldn’t have said it better myself.

How are you holding up? We're eight months into the pandemic in the United States, and many aspects of our lives have … END_OF_DOCUMENT_TOKEN_TO_BE_REPLACED

As quickly as it came, summer’s nearly gone. While I’d love to say I’m finally coming up for air from a hectic period of … END_OF_DOCUMENT_TOKEN_TO_BE_REPLACED

Summer Solstice was just yesterday, and yet it feels as if it's been summer for a while now. At least, I've been … END_OF_DOCUMENT_TOKEN_TO_BE_REPLACED