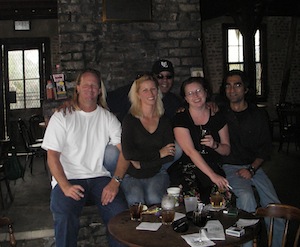 Media attention is on New Orleans this week for the fifth anniversary of Hurricane Katrina and the deluge that followed the storm. I’ll be in the Crescent City for the anniversary, among a group of people working on a Habitat for Humanity house—just one of many that are still needed.

I was in New Orleans only a couple of weeks ago, and am thrilled to be going back so soon. There’s something about the city that grabbed me the first time I visited, and I’ve never been able to get that place out of my mind. The feeling has only gotten stronger since Katrina.

In December 2005, Doug and I went to New Orleans to help by spending much-needed tourist dollars. We waited until we knew we wouldn’t be a burden on the city and its limited services, and we were well aware that most places remained closed.

After we walked into our favorite bar and ordered a drink, someone at the round table behind us asked: “Hey, y’all FEMA?”

No, we weren’t, we explained. We just wanted to spend some tourist money and see how things were three months after Katrina and the Federal Flood.

“Then your drinks are on me and you need to come on over here and join us,” responded the man.

That was just the beginning of getting to know what has become our group of New Orleans friends. More than 15 visits later, we’ve shared many hours at the round table in that bar (and others), crawfish boils, barbecues, Mardi Gras parades, Jazz Fest weekends, birthdays and a wedding. It’s been more than two years since we’ve stayed in a hotel, even though I always loved the sweet B&B where we were regulars. Instead, we bunk with friends in the Marigny.

I thought I was pretty familiar with the city before meeting them. And even though one friend will protest that I know more about New Orleans than he does (as a longtime resident), I’ve learned enough to know that as much as I’m familiar with New Orleans culture, I’ll never really know the city until I live there. And that’s often a question posed by our group of friends: “How is it that you don’t live here yet?”

The day I do have a home in New Orleans, I know that making an invitation list for my housewarming party will be easy.

How are you holding up? We're eight months into the pandemic in the United States, and many aspects of our lives have … END_OF_DOCUMENT_TOKEN_TO_BE_REPLACED

As quickly as it came, summer’s nearly gone. While I’d love to say I’m finally coming up for air from a hectic period of … END_OF_DOCUMENT_TOKEN_TO_BE_REPLACED

Summer Solstice was just yesterday, and yet it feels as if it's been summer for a while now. At least, I've been … END_OF_DOCUMENT_TOKEN_TO_BE_REPLACED