I never thought that spending a day to build a house in the pouring rain would be a rewarding experience. But on August 28, one day before the Hurricane Katrina five-year anniversary, I did just that—and I’d do it again in a second.

To be honest, I wasn’t prepared at all for the rain. Sure, I saw weather forecasts for thunderstorms before I left for New Orleans, but I’d been there two weeks beforehand, and it was the heat, not the rain, which stuck in my mind. Besides, I just didn’t believe it would rain that day. I imagined myself collapsing under a tent due to the heat before I imagined myself wringing water out of my shorts and T-shirt. 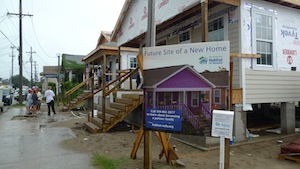 That morning, I joined Marriott International employees, Marriott hotel guests and Habitat for Humanity staff to build one of five homes in the 7th Ward. The New Orleans Marriott and eight other Marriott properties in the city offer the “Spirit to Serve New Orleans” package, which allows guests to enjoy their time in New Orleans, as well as help out.

Through 2010, guests can volunteer with New Orleans Area Habitat for Humanity or the Second Harvest Food Bank of Greater New Orleans. Included in the package are: deluxe accommodations, a dedicated concierge to help coordinate volunteer activities, transportation to and from the volunteer site for two, box lunch for two and two commemorative T-shirts. Rates start at $99 per night. 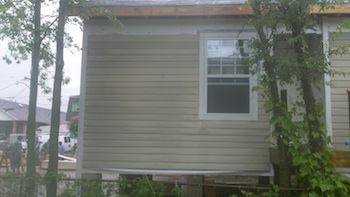 Once I started working that day, being wet was the last thing I thought about. I’m not a particularly comfortable ladder person, yet there I was, perched on a ladder outside the house, nailing siding up on the wall. I didn’t think to ask for another job. I just sucked it up and worked with my building partner, Susan Barnes, to learn a new skill and help get the house done. Take a look at our work in the photo above. Don’t focus on that one uneven piece of siding—look at the entire picture.

Before I knew it, it was time to clean up our tools and end the day. Because it was a special event for Katrinaversary, we celebrated by having a second line down the street where the five houses were under construction. Workers, new homeowners and neighbors joined the brass band, which included Branford Marsalis. 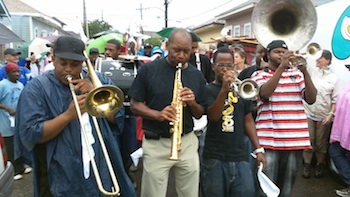 I got choked up just watching the neighborhood celebrate this event after the flooding disaster that followed Katrina. I’ve visited the city nearly 20 times in the past five years, writing articles, hanging out with friends and being a tourist—but that moment got me. It’s a good thing I had a second-line handkerchief in my hand.

Afterward, we chowed down on the best jambalaya I’ve ever had and went back to the New Orleans Marriott—where staff members met us with dry towels and cheers. I’m hooked, not just on New Orleans. I’d sign up to do a Habitat build there again.

Middle and bottom photos courtesy of Susan Barnes. Thanks!

I was in New Orleans as a guest of the New Orleans Marriott, but the opinions in this post are my own.

How are you holding up? We're eight months into the pandemic in the United States, and many aspects of our lives have … END_OF_DOCUMENT_TOKEN_TO_BE_REPLACED

As quickly as it came, summer’s nearly gone. While I’d love to say I’m finally coming up for air from a hectic period of … END_OF_DOCUMENT_TOKEN_TO_BE_REPLACED

Summer Solstice was just yesterday, and yet it feels as if it's been summer for a while now. At least, I've been … END_OF_DOCUMENT_TOKEN_TO_BE_REPLACED