One Jazz Fest weekend in the early 1990s, I had breakfast at the famed New Orleans restaurant, Brennan’s. My sister and brother-in-law accompanied me, and while our wallets were much lighter after the meal, we had fond memories of that amazing breakfast.

A few weeks ago, I returned to Brennan’s for breakfast. I can’t believe that I’ve been away for so long. But when I’m in New Orleans nowadays, I stay with friends in the Marigny, so I’m more likely to get my morning meal right around the corner at La Peniche.

Let me enumerate the things I love about Brennan’s. 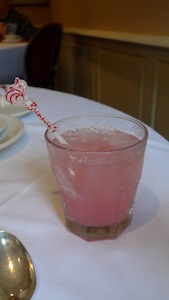 You might be sluggish in the morning, due to too much partying the night before. What do you need in order to solve that? Coffee? Sure, bring it on. But you also need an “eye opener.” No, that’s not coffee, it’s an adult beverage. My favorite is the Ojen Frappé, a sweet anisette drink. Ojen was once made in a small village in Spain, and is no longer available anywhere, except from someone’s personal stock. When I see it on a menu, I’m getting it. 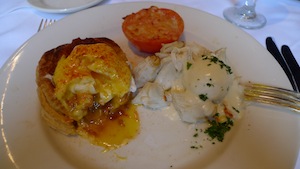 My breakfast in the photo above (after the cinnamon toast and Creole onion soup) was a combination of Eggs Portuguese and Eggs Nouvelle Orléans. Eggs Portuguese have poached eggs covered in Hollandaise sauce atop flaky pastry shells filled with chopped tomatoes sautéed in butter with shallots and parsley. Eggs Nouvelle Orléans consists of a huge mound of lump crabmeat topped with poached eggs and a brandy cream sauce. Both dishes were absolute heaven. 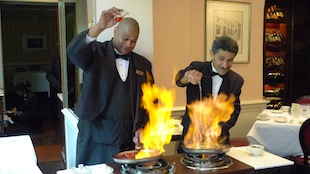 Remember to leave room for dessert, because you’re having Bananas Foster, created at Brennan’s. The dish starts with bananas. They’re sautéed in butter, brown sugar, cinnamon and banana liqueur, all in front of you. The final theatric moment of the preparation has flames leaping high above the pan as your waiter adds rum. It’s then spooned over vanilla ice cream. A friend has made this at home for me, and thank goodness, because I think I’d singe my eyebrows off if I ever tried it myself.

Brennan’s serves dinner, too. And I’m sure it’s as wonderful as breakfast. In fact, I think I’ll try that next time. They have Bananas Foster for dessert in the evening as well, so I won’t miss my favorite dish.

Try it out yourself. Just don’t drink my Ojen.

I was in New Orleans as a guest of the New Orleans Marriott, but the opinions in this post are my own.

How are you holding up? We're eight months into the pandemic in the United States, and many aspects of our lives have … END_OF_DOCUMENT_TOKEN_TO_BE_REPLACED

As quickly as it came, summer’s nearly gone. While I’d love to say I’m finally coming up for air from a hectic period of … END_OF_DOCUMENT_TOKEN_TO_BE_REPLACED

Summer Solstice was just yesterday, and yet it feels as if it's been summer for a while now. At least, I've been … END_OF_DOCUMENT_TOKEN_TO_BE_REPLACED