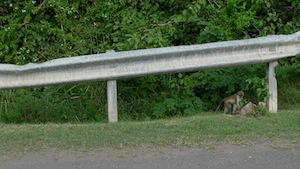 No, it’s not a new horror film. On the island of St. Kitts, it’s said that monkeys outnumber the human residents nearly two to one. The vervet monkeys are not native to St. Kitts, but were brought by French settlers and left there when the British took over the island.

The few vervets I saw were along the road or in the jungle as I hiked. We’d be driving along listening to calypso music, and then someone in the car shouted, “Monkey!” We tried to stop quickly and quietly. Too much drama made the monkeys scatter. Since we don’t have wild monkeys on Guanaja, I’m always happy when I’m traveling to a destination where I have a chance of seeing them.

While I was in St. Kitts, I didn’t see any obnoxious monkey antics. No panhandling monkeys. No roving gangs of alcoholic monkeys, either, which I’ve heard can show up on Reggae Beach. This YouTube video was taken in St. Kitts by the BBC, and before I traveled there, I completely expected that I’d have to defend my frosty beverage from drunk monkeys while I was lounging in the sun. But the only vervet I saw while I was on Reggae Beach was Oliver, a monkey in a cage who likes to steal eyeglasses.

If any monkeys on St. Kitts have successfully made off with the local cocktail called “Ting With a Sting,” I feel sorry for them. I could only have two and a half before I had to completely quit drinking for the evening. Strong stuff.

How are you holding up? We're eight months into the pandemic in the United States, and many aspects of our lives have … END_OF_DOCUMENT_TOKEN_TO_BE_REPLACED

As quickly as it came, summer’s nearly gone. While I’d love to say I’m finally coming up for air from a hectic period of … END_OF_DOCUMENT_TOKEN_TO_BE_REPLACED

Summer Solstice was just yesterday, and yet it feels as if it's been summer for a while now. At least, I've been … END_OF_DOCUMENT_TOKEN_TO_BE_REPLACED