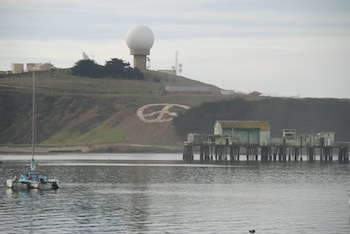 Yes, I’m still here. With trips to New Orleans and Belize, a handful of deadlines and the regular winter holiday crazy, I had to fall off the blogging map for a little while. Now that things have calmed down and I’m not going anywhere for a few weeks, I’m back on the horse.

Although I love living in my little coastal town, I often let myself get wrapped up in work and forget to really enjoy it. The other day, while researching some information for a project, I learned something new after living here for more than 10 years.

There’s an abandoned pier in Pillar Point Harbor, known as Romeo Pier, that’s quite beautiful in its decay. I can’t count the times I’ve walked past or kayaked under it, looked up to the sea-green building and its sign, “Sea Fish”—and wondered about its history. Last week, I sat down with Charlie Romeo, the son of the man who built the pier. No reservation was required: I went over to the Romeo Packing Company, wandered around a little until I found the office, and asked if someone could tell me about the pier.

“That’s Charlie,” someone said, and pointed to a man in the other room.

Charlie cleared off a chair for me, and patiently answered my questions about Romeo Pier. It was built in 1940 by his father, Joe Romeo, for the A. Romeo Fish Company—in order to buy directly from fishermen for his fish market, which supplied hotels and restaurants. In 1946, he opened a cannery as well, which eventually morphed into the existing fertilizer company in the 1950s.

The best detail? Charlie showed me a label back from the canning days. The company’s logo was a fish with glasses named Charlie, which his father named after him. Years later, the logo was sold to StarKist, was redesigned, and became known as Charlie the Tuna.

It turns out that I could have learned that detail from a local book, however sitting down with someone so closely connected to the history of the pier was far better than just reading about it. And even though it happened at home, it illustrates one of the things I love so much when I travel—talking with people to learn their history and how it ties in with a place. After having those personal experiences, guide books just can’t compare.

How are you holding up? We're eight months into the pandemic in the United States, and many aspects of our lives have … END_OF_DOCUMENT_TOKEN_TO_BE_REPLACED

As quickly as it came, summer’s nearly gone. While I’d love to say I’m finally coming up for air from a hectic period of … END_OF_DOCUMENT_TOKEN_TO_BE_REPLACED

Summer Solstice was just yesterday, and yet it feels as if it's been summer for a while now. At least, I've been … END_OF_DOCUMENT_TOKEN_TO_BE_REPLACED