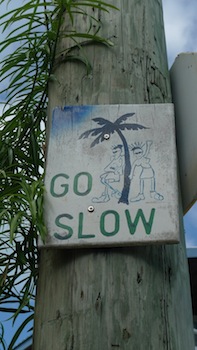 Aside from a couple of fairly miserable airplane experiences this year (and I had enough decent flights to balance it out), I didn’t have too many bad travel moments in 2010. I made return trips to my two secondary homes—Honduras and New Orleans—but the majority of my travels were to places either new to me, or places I hadn’t seen in many years.

Here are some highlights from the international destinations I visited in 2010:

Aruba: On the dusty side of Aruba, I spent some time in a natural pool with reef fish. The occasional crash of a large wave made the pool fizz like soda water, cutting visibility for a few moments. It was one of those places where, even though others were around, I was able to feel like I was alone with nature.

Belize: While staying on Ambergris Caye, I went on a snorkeling trip to the Hol Chan Marine Reserve and Shark Ray Alley. I’ve snorkeled in the same reef system nearly 100 times, but this spot was like swimming in an aquarium. Green turtles? Check. Nurse sharks? Check. Spotted eagle rays? Check. Crayola-colored reef fish, gigantic green moray eels and jacks that swam along with me like a pack of lap dogs? Check, check, check.

Dominican Republic: Right in the middle of the Samaná Peninsula, I took a horseback voyage through the jungle, across the Río Limón, along a ridge and down to a 170-foot cascade—the Salto El Limón. The water was a little chilly to swim in at first, but I just had to see the view from behind the waterfall.

Honduras: I pretty much figure the closest I’ll ever get to a U.S. president is the distance from my sofa to their image on the TV. But that changed when Jimmy Carter decided to take a fishing trip on Guanaja in 2010, while I was on the island. I didn’t meet him, but did spend some time chatting with his friends and Secret Service detail. And I got to see him up close and not on TV.

Riviera Maya: Just sitting on the beach is wasted on me. My favorite moment on my trip to the Riviera Maya was snorkeling in Cenote Aguila, a freshwater sinkhole, and then kayaking on the Rio Selva to the Caribbean Sea. The area was well preserved, and it was nice to see the mangrove forests that are often ripped out so tourists can enjoy sandy beaches.

St. Kitts: I hiked through the forest and up to the crater of the island’s volcano, Mount Liamuiga. While the views were spectacular, the best part of the hike was the guide—O’Neil Mulraine. He’s been a hiking guide for 25 years and is also a specialist in bush medicine, so his stories along the way really added to the experience. I didn’t even care that I sprained my thumb on the way down.

What’s in store for 2011? At the moment, I have plans for Nicaragua, New Orleans and Honduras. But that list will grow, and not yet knowing how it will is part of the excitement.

How are you holding up? We're eight months into the pandemic in the United States, and many aspects of our lives have … END_OF_DOCUMENT_TOKEN_TO_BE_REPLACED

As quickly as it came, summer’s nearly gone. While I’d love to say I’m finally coming up for air from a hectic period of … END_OF_DOCUMENT_TOKEN_TO_BE_REPLACED

Summer Solstice was just yesterday, and yet it feels as if it's been summer for a while now. At least, I've been … END_OF_DOCUMENT_TOKEN_TO_BE_REPLACED