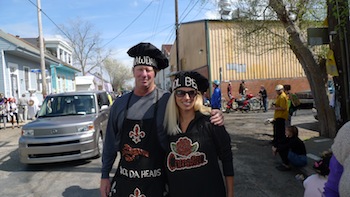 Three years ago, I visited New Orleans during the height of Carnival season. It was nothing like what I’d imagined. All the national media focus on the hordes of drunken bead-throwers on Bourbon Street had burned into my brain over the years and made me give the whole thing a pass. But local friends assured me, “No, it’s really more of a family thing—just avoid the crazy Bourbon Street mess,” and I decided to give it a try.

That first year, I was enthralled. I decided that the next year I’d sign up to ride in one of the parades. But before I could do so, I was laid off, and paying to ride in a parade moved lower on my list of necessities. And then, I ran into the Redbeans Parade.

The group has been parading on Lundi Gras since 2009, starting at the edge of the Bywater and walking through the Marigny, Treme and French Quarter in costumes covered in red beans (as well as other types of beans) and rice. The group’s grand marshal for life is Al “Carnival Time” Johnson, and the Treme Brass Band provides the all-important music for the second line.

Some of the costumes look like they have taken the equivalent of a full-time job to create. Others are thrown together a little more quickly, however all of them give you a glimpse into the creativity of the individual Beaners (as the group calls its members).

Red beans and rice is an important culinary dish in New Orleans, traditionally served on Mondays. And making elaborate suits each year for limited wear during Carnival season is part of the Mardi Gras Indian tradition. Even though the Redbeans group is relatively new, the blend of New Orleans culture makes it seem comfortably familiar already.

I found the Redbeans Parade last year, the group’s second annual parade. Doug and I walked along with them, but we didn’t quite fit in with the Beaners, since we hadn’t prepared bean suits.

This year, we planned differently. Our suits were chef’s aprons and toques that we’d labored over with beans, rice and a hot glue gun. We packed them gently in our suitcases, told our New Orleans friends to come out and join us, and hit the streets to parade with the group on Lundi Gras. We packed our apron pockets with beads, doubloons and rice to throw at onlookers and felt like rock stars when the crowds swelled and people cheered.

“Did you rice anyone over in that group?” I asked Doug, wondering if I should throw a handful of rice as we second-lined through the Treme.

“I love that I overheard you and knew exactly what you meant,” replied another Beaner, decked out in a rainbow of legumes.

Sure, I still dream of riding in a parade krewe, but I’m hooked on the Redbeans Parade. I’m already dreaming up costuming ideas for next year, and have convinced friends to join us. I may not live in New Orleans, but I’m a Beaner and I’m proud.

How are you holding up? We're eight months into the pandemic in the United States, and many aspects of our lives have … END_OF_DOCUMENT_TOKEN_TO_BE_REPLACED

As quickly as it came, summer’s nearly gone. While I’d love to say I’m finally coming up for air from a hectic period of … END_OF_DOCUMENT_TOKEN_TO_BE_REPLACED

Summer Solstice was just yesterday, and yet it feels as if it's been summer for a while now. At least, I've been … END_OF_DOCUMENT_TOKEN_TO_BE_REPLACED