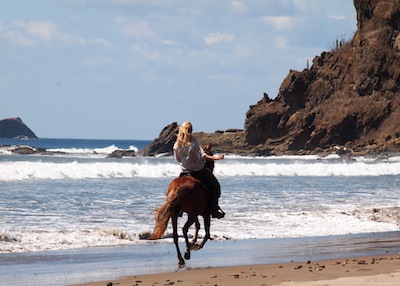 I was one of those horse-crazy girls. From riding lessons to a massive collection of Breyer models to dreams of owning one—it must have been rather difficult for my parents for a few years there. Easy to buy me a present, I suppose: “Oh, just get Jill something horse-themed. Yes, anything.” But I’m sure my non-stop equine addiction was annoying on a daily basis.

And then somewhere, other distractions got in the way and turned the volume down on the horse-craziness. I still went out on horseback riding excursions from time to time, but usually when they were conveniently available. I didn’t seek them out.

It took galloping on a Nicaraguan beach to bring it all back.

When it was time to fit riders to horses at Rancho Chilamate near San Juan del Sur, owner Jamie asked me about my experience. The last time I was on horseback was in the Dominican Republic last summer. Regardless, I still feel pretty comfortable and I told him that I was cool with galloping, but wanted a horse that would pay attention to what I was asking him.

I was assigned to Malcoche, whose name I was told is a local nickname for caramel, which made sense considering the rich color of his coat. We joked about the other possible meaning: bad car. Jamie warned me that while my horse would pay attention to my direction, he was a speedster—and would likely position us at the front of the group. Less dust, I figured.

We rode out from the ranch, through the neighboring village, down back roads and across rivers, until passing through a dry tropical forest with napping howler monkeys dripping from tree branches. Malcoche kept me up front the entire time.

“Your horse likes to go fast,” said Franklin, with a smile. A ranch hand along for the ride, he spoke to me in Spanish, which I didn’t entirely understand since my Spanish language skills are still a little rusty. But I understood that sentence. The entire ride, Malcoche surged ahead when another horse threatened to take our place at the head of the group. He often tried to canter far ahead, but when I pulled back on the reins, it was enough to slow him down.

When we arrived on the beach, after a tack check, I was told I could take my speedy horse for a run. Both Jamie and Blue told me that if I was worried about Malcoche, I could take another horse. But I felt I owed it to Malcoche. After holding him back on the trail, I think he needed to fly for a little while.

And wow. I was immediately transported back to 9-year-old me with my endless dreams of galloping on a horse along a remote beach. This was the exact picture. I don’t think I stopped smiling for hours.

Those few minutes of running back and forth on the beach were enough to make me move horseback riding way up on my list. And the next time I’m in Nicaragua, I’m definitely carving some time out from surfing to take another ride at Rancho Chilamate. I hope I can get the same speedy caballo.

How are you holding up? We're eight months into the pandemic in the United States, and many aspects of our lives have … END_OF_DOCUMENT_TOKEN_TO_BE_REPLACED

As quickly as it came, summer’s nearly gone. While I’d love to say I’m finally coming up for air from a hectic period of … END_OF_DOCUMENT_TOKEN_TO_BE_REPLACED

Summer Solstice was just yesterday, and yet it feels as if it's been summer for a while now. At least, I've been … END_OF_DOCUMENT_TOKEN_TO_BE_REPLACED