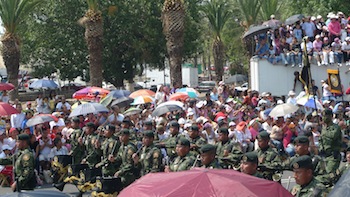 Celebrated in the United States as a day of Mexican heritage as well as a festive drinking holiday, Cinco de Mayo (May 5) is also confused by many as Mexico’s Independence Day (Sept. 16). I’ve heard some explain the difference while saying that Cinco de Mayo isn’t observed at all in Mexico. But the anniversary of the Mexican army’s victory over French forces at the Battle of Puebla on May 5, 1862, is important in the state and city of Puebla.

Cinco de Mayo is also my birthday. When I was a kid, before I knew of the Puebla significance, I was bewildered by the masses of strangers celebrating my birthday at my local Mexican restaurant, where I went with my family every year. Of course, once I learned more about Cinco de Mayo, I felt pretty stupid.

This year, I traveled to Puebla to see what happens on Cinco de Mayo.

The largest event of the day is the parade, featuring military, schools and floats on the Boulevard Heroes del Cinco de Mayo. The parade kicks off at 10 a.m. and is over by 2 p.m. Well before things get started, people start to stake out their spots along the parade route, and entrepreneurial folks set out rows of chairs—then charge a small fee if you’d like to sit in them. Vendors sell everything from colorful fake fur faux-hawks to homemade paletas to umbrellas for shading people from the hot sun.

Once the parade is over, families go to outdoor cafés for lunch, or meander through the zócalo and other plazas in town to watch acrobats and listen to musicians perform. Doug and I walked over to the Mercado El Carmen to get a cemita (a tasty sandwich similar to a torta) for lunch and buy a couple of comales for roasting chiles at home.

Near the end of the day, there’s a ceremony in the zócalo as the huge Mexican flag is taken down and marched over to City Hall. The Festival International Palafoxiana, which runs from April 16 (Puebla was founded on April 16, 1531) through May 5, has its final concert in the evening.

And then it’s all over. No crazy drinking. No fireworks. Just a parade and a little holiday spirit. It was the perfect way to celebrate my birthday.

How are you holding up? We're eight months into the pandemic in the United States, and many aspects of our lives have … END_OF_DOCUMENT_TOKEN_TO_BE_REPLACED

As quickly as it came, summer’s nearly gone. While I’d love to say I’m finally coming up for air from a hectic period of … END_OF_DOCUMENT_TOKEN_TO_BE_REPLACED

Summer Solstice was just yesterday, and yet it feels as if it's been summer for a while now. At least, I've been … END_OF_DOCUMENT_TOKEN_TO_BE_REPLACED