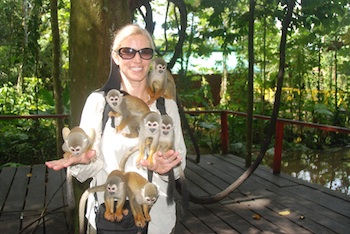 The small bananas in the plastic bag looked a little like apple bananas. I couldn’t taste them, because they were for the monkeys.

“Hold the banana tightly, or they’ll take it,” said the guide. “As they eat the banana, move your fingers so they don’t bite you. You won’t need to peel it—they’ll do that.”

I thought it would be much easier than it was.

As we walked through the trees along the Amazon River in Colombia, excited squeaks came from every direction and tiny squirrel monkeys flooded down the tree trunks and ran behind me. The scene reminded me a little of the gang of flying monkeys in The Wizard of Oz, but all cute instead of evil.

When I got to the spot where I could dig into the plastic bag for a banana, about 15 squirrel monkeys mobbed me. Their little feet felt cool on my hands, and they perched all over me: my head, shoulders, arms, hands, backpack, camera bag and camera. The monkeys weighed nearly nothing (fortunately) and they jumped on me trying to get to the banana I held tightly in my fingers.

I could feel their teeth nibble at my fingertips and tried to inch my fingers to the bottom of the banana so the nibbling wouldn’t turn into biting. But it was easier said than done, and once I loosened my grip on the fruit—it was gone.

Even with the absence of their meal, some squirrel monkeys remained perched on me. I tried talking with one sitting on my shoulder, and it stared at my mouth, possibly wondering what my sounds meant. Then, the monkey reached over and placed its hand on my lips. Shhh, no more talking.

How are you holding up? We're eight months into the pandemic in the United States, and many aspects of our lives have … END_OF_DOCUMENT_TOKEN_TO_BE_REPLACED

As quickly as it came, summer’s nearly gone. While I’d love to say I’m finally coming up for air from a hectic period of … END_OF_DOCUMENT_TOKEN_TO_BE_REPLACED

Summer Solstice was just yesterday, and yet it feels as if it's been summer for a while now. At least, I've been … END_OF_DOCUMENT_TOKEN_TO_BE_REPLACED