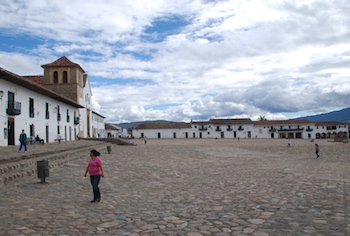 On any trip, there always seems to be a place that I wish I’d had more time to explore. And that’s usually the first spot I want to go back to visit. On my recent Colombia trip, that place was Villa de Leyva.

I arrived in the evening, a little more than an hour after sunset, so my first impression was limited by the velvet darkness. As we drove along the narrow streets to the Hotel Duruelo, light spilled out of buildings and I hit my forehead on the car window, trying to get a closer look.

“There are a lot of good places to hang out and get a beer in the evening,” advised Jorge, my guide, who lived in the area. It was clear that he saw my interest in the street scene, but I hoped he hadn’t caught my clumsy headsmack.

I wanted to wander around and find some of those places, to sit and watch people enjoy the night. But I wasn’t sure if his comment was an invitation, or if it was just a piece of information to tick off his list. Shortly after I checked in at the hotel, he was gone—wishing me a good night and saying he’d see me in the morning. Suddenly, I was too tired to even venture out on my own.

I woke at daybreak to birdsong, and quickly rushed to pull some clothes on so I could walk in the hotel gardens before other guests disturbed the quiet. With bare feet, I tiptoed on stepping stones and wet grass and breathed in the lush scent of the tropical flowers, trees and earth saturated by a rainstorm I’d heard in the middle of the night.

It began to rain lightly. Tiny hummingbirds zoomed overhead with their chirping battle cries, and I could hear the hum of their wings as they circled around me. One turned back briefly and hovered in front of my face to tease me with its bright emerald feathers, only to disappear over the red-tiled roofs of the colonial town.

A national monument since 1954, Villa de Leyva’s narrow stone streets are lined with brightly whitewashed homes. The only thing that separated the buildings from blending into the sky full of bleached clouds was the line of red from the tiled roofs.  It’s beautiful without being too precious, and there’s enough real-life detail that keeps it from being Disneyfied. I immediately assumed that everything was ancient—down to the cobblestone streets.

“Oh no,” said Jorge. “The streets were dirt, and then they added the stones in the ‘50s or ‘60s because it looked good.”

While some guidebooks point out that it’s possible to see the town in a day, my quick visit to Villa de Leyva wasn’t enough. I wanted to hike in the surrounding mountains, meander down the small streets, look behind doorways, linger in the beautiful plaza (at 150,000 square feet, it’s one of the largest in South America) and watch the light change it all as the day moved from morning to evening and back again.

I need more time. And for that, I’m willing to go back and make it my top priority.

How are you holding up? We're eight months into the pandemic in the United States, and many aspects of our lives have … END_OF_DOCUMENT_TOKEN_TO_BE_REPLACED

As quickly as it came, summer’s nearly gone. While I’d love to say I’m finally coming up for air from a hectic period of … END_OF_DOCUMENT_TOKEN_TO_BE_REPLACED

Summer Solstice was just yesterday, and yet it feels as if it's been summer for a while now. At least, I've been … END_OF_DOCUMENT_TOKEN_TO_BE_REPLACED