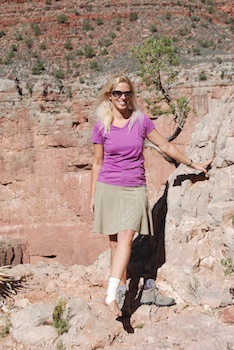 I’m a little ashamed to admit that last week was my very first trip to the Grand Canyon. There’s no good excuse for missing out on such an astonishing place until now. But regardless of how long it took for me to get there, at least when I finally saw the Grand Canyon, I did it the right way—on a hike from the south rim to the bottom of the canyon and back out.

I went along on an REI Adventures South Rim Loop trip with six other people in my group, plus a guide. We started out in Phoenix, drove to the south rim, and stayed the night in the El Tovar Hotel. The next morning, after a very early breakfast (and a too-close walk past a gigantic bull elk), we shouldered our daypacks and headed into the canyon.

Just looking at the Grand Canyon from above is an amazing experience in itself—even if you’re surrounded by crowds of people in the Grand Canyon Village on the south rim. But less than 1 percent of the 5 million visitors per year dip below the canyon rim to see what lies beyond. After doing it myself, I wouldn’t have it any other way.

We descended 4,740 vertical feet on the South Kaibab Trail, the shortest route from the south rim to the Colorado River (6.4 miles). For much of the way, the trail keeps to ridge tops, and it’s hard to keep your eyes off the expansive views of the canyon. The dusty trail can be steep and uneven, and the biggest lesson I learned (a little too late) was to stop before I took my eyes off the trail and looked around. Not quite halfway down into the canyon, I twisted my ankle and fell. The rest of the way to Phantom Ranch as well as the entire return trip to the south rim via the Bright Angel Trail, I limped along on my swollen and bruised sprained ankle.

It’s the first time I’ve been injured on a trip, and aside from the little bit of pain and inconvenience, it didn’t detract from my time in the canyon one bit. In fact, maybe next time I’ll hike from the north to the south rim (the R2R route). But if I do, I’ll be a little more careful about watching where I walk.

How are you holding up? We're eight months into the pandemic in the United States, and many aspects of our lives have … END_OF_DOCUMENT_TOKEN_TO_BE_REPLACED

As quickly as it came, summer’s nearly gone. While I’d love to say I’m finally coming up for air from a hectic period of … END_OF_DOCUMENT_TOKEN_TO_BE_REPLACED

Summer Solstice was just yesterday, and yet it feels as if it's been summer for a while now. At least, I've been … END_OF_DOCUMENT_TOKEN_TO_BE_REPLACED