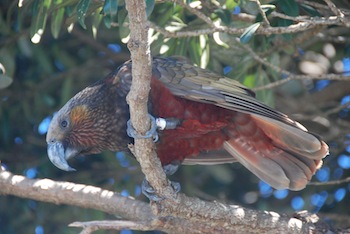 An hour from downtown Wellington, Kapiti Island is one of New Zealand’s most successful nature reserves and is a model for wildlife and flora conservation. Since 1897, the island has been used as a bird sanctuary, where the region’s rich birdlife can recover in safety from years of being threatened by mammals introduced to the country. Some of the birds may want to snag your food when you visit.

On a visit to Kapiti Island, a ferry dropped me at Waiorua Bay along the rocky shoreline dotted with shiny paua (abalone) shells. Immediately, I was surrounded by the calls of tui, kākā, saddleback, weka, takahē—and the noisy beat of the wings of the large kererū, the New Zealand pigeon.

Earlier in my trip, I’d spent hours listening to the tui and its bellbird-like call, but the visit to Kapiti allowed me to get close to another of the country’s birds, the kākā. One of New Zealand’s three native parrots, the North Island kākā has brown feathers with bright orange and scarlet under its wings.

A group of them perched in the trees outside the office of Kapiti Island Nature Tours, where I’d stopped for a snack. But with the snack came a warning. If I was planning to go outside with food in my hands, I needed to keep an eye out for hungry kākās.

I immediately pictured a serene Disney scene, where cute parrots perched on my arm, eyeing my cookie. That wasn’t what happened at all.

A man walked outside with a cup of tea in one hand and a cookie in the other. Seconds later, two kākās took off from their tree perches, and flew straight at his head. His arms flailed in the air among the feathered dive bombers, spilling hot tea all over as he tried to defend his treat. But just as suddenly it began, the birds flew back to the branches—with a neatly divided cookie between them.

A few other people seemed to want to test the birds, as if they couldn’t possibly want more cookies now that they’d gotten one. As each person opened the door to walk outside, the exact same scene played over again: kākās flew at cookie-bearer, human waved arms and spilled everything, kākās grabbed cookie and flew away.

I finished my snack inside. Only then did I venture out into the danger zone to get a front-row seat to watch the cookie raids.

How are you holding up? We're eight months into the pandemic in the United States, and many aspects of our lives have … END_OF_DOCUMENT_TOKEN_TO_BE_REPLACED

As quickly as it came, summer’s nearly gone. While I’d love to say I’m finally coming up for air from a hectic period of … END_OF_DOCUMENT_TOKEN_TO_BE_REPLACED

Summer Solstice was just yesterday, and yet it feels as if it's been summer for a while now. At least, I've been … END_OF_DOCUMENT_TOKEN_TO_BE_REPLACED