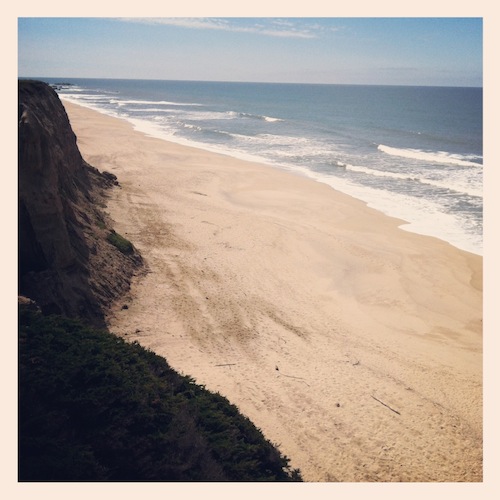 A year ago, I walked from Santa Cruz to Monterey—mostly on the beach. Walk the Bay, run by Slow Adventure founder Margaret Leonard, is a four-day, 40-mile inn-to-inn trek along the coast of Monterey Bay. I’ve visited the area more times than I can count, but until that hike, had never been alone for hours along those miles of coastline.

Highway 1 was just on the other side of the dunes, but I never heard the traffic noise. I only saw crowds at the beginning and end of the four days. It felt remote—in an area popular with tourists.

Earlier this week, I helped Margaret beta test a section of a new route, from Half Moon Bay to San Francisco. The section is one on which I’m well practiced: Half Moon Bay to Pillar Point Harbor. Of the approximate six miles, I’ve walked, run and biked five of it. The last mile runs from the main section of Half Moon Bay south to the Ritz-Carlton hotel.

Regardless of the weather, the views on the Coastal Trail along this stretch—and even all the way up to San Francisco—are breathtaking. This particular Slow Adventure will be available in 2013, once the new tunnel at Devil’s Slide is opened, so mark your calendars to try it out!

How are you holding up? We're eight months into the pandemic in the United States, and many aspects of our lives have … END_OF_DOCUMENT_TOKEN_TO_BE_REPLACED

As quickly as it came, summer’s nearly gone. While I’d love to say I’m finally coming up for air from a hectic period of … END_OF_DOCUMENT_TOKEN_TO_BE_REPLACED

Summer Solstice was just yesterday, and yet it feels as if it's been summer for a while now. At least, I've been … END_OF_DOCUMENT_TOKEN_TO_BE_REPLACED