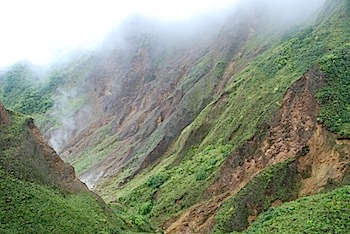 I’d only been in Dominica for one day, but when I shared my ambitious hiking itinerary for my short stay on the island, a local woman looked me over, knit her brows, and expressed concern for me and my athletic goals.

“You’re going to the Boiling Lake? You don’t look like a tomboy. Are you sure you can do it?” she asked.

Perhaps it was my fault for discussing one of the hardest hikes on the island while standing around in my bikini. I was aware the Boiling Lake hike wouldn’t be an easy stroll, but I was determined to get there.

Many know the Caribbean island of Dominica as the “Nature Island” due to its volcanic peaks, lush rainforest, clear waterfalls, abundance of rivers, and even boiling waters. It’s not your typical Caribbean island, where hordes of visitors are content to lounge on the beach all day, interrupted only by occasional bar service. Here, hikers and divers abound, and the Boiling Lake hike is the peak adventure for many of them.

A six-hour round trip over challenging terrain, this hike in the Morne Trois Pitons National Park ranks as one of Dominica’s most demanding trails. The first hour of the trail traced through rain forest and rose gradually from 1,690 feet to 2,260 feet before it dropped toward the Trois Pitons River, called the “Breakfast River” because it’s the often the first stop for a snack. Because the sky was gray and it had already begun to rain lightly, my guide Zahir and I continued without stopping at the river.

Next, the path followed a ridge as it moved from rain forest to montane forest. At 3,160 feet was a lookout with views across the Morne Trois Pitons National Park, a UNESCO World Heritage Site. Mist was descending along the trail, so I saw only pieces of the emerald peaks, until they were shrouded in fog.

The trail then dipped down into the Valley of Desolation. Volcanic activity in Dominica has changed this once-forested area to a strange rocky landscape of gray and gold, punctuated by grasses, mosses, and lichens. Silvery streams of varying temperatures meander through the area. I took turns dipping my muddy feet into a warm stream, then a cool one. Just a few feet away, bubbling sounds suggested I could try an even hotter water source, but it wouldn’t be a smart choice.

A flooded fumarole, the Boiling Lake appeared at the end of the trail like a cauldron of bubbling gray-blue water enveloped in a veil of vapor, until a breeze came along to blow the cloud away. Groups of hikers stopped and posed for photos. Others found seats so they could enjoy lunch before heading back for three hours on the return trip. Zahir took a photo of me, volcanic clay smeared on my face, as I stood in front of the bubbling lake. I needed evidence for my concerned Dominican friend.

How are you holding up? We're eight months into the pandemic in the United States, and many aspects of our lives have … END_OF_DOCUMENT_TOKEN_TO_BE_REPLACED

As quickly as it came, summer’s nearly gone. While I’d love to say I’m finally coming up for air from a hectic period of … END_OF_DOCUMENT_TOKEN_TO_BE_REPLACED

Summer Solstice was just yesterday, and yet it feels as if it's been summer for a while now. At least, I've been … END_OF_DOCUMENT_TOKEN_TO_BE_REPLACED