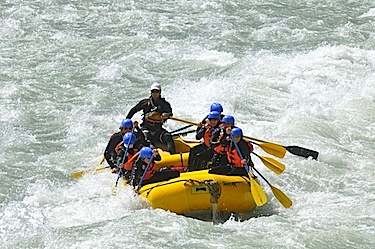 Considering my time with ocean-related sports, I’m surprised that I haven’t carried my interest over to rivers. The only time I’ve ever river rafted was the summer before my last year as an undergraduate, with a handful of girlfriends on the American River. There was little rafting. It was mainly floating with a cooler or two of beer.

A couple of weeks ago, I had the chance to raft the class-IV whitewater of the Elaho River in the Coast Mountains of British Columbia. Our group of two rafts and safety kayak traveled more than 11 miles on two rivers: the Elaho and Squamish. Aside from that, the Elaho Valley has spectacular scenery—from waterfalls to hanging glaciers to vast old-growth forests. It’s often hard to keep your eyes on the river with all the beautiful distraction around you.

My friend Jayme and I plunked ourselves in the front of our raft, pretty much ensuring we’d be thoroughly soaked the entire trip. We powered through rapids named Cheeseball, the Devil’s Elbow, Steamroller and Tombstone. The last rapid had a hulk of a standing wave named Mike Tyson. Despite all the churning water, nobody fell out of the raft.

It was perfect timing to be with a gang of women on a pretty bad-ass river. There are moments in my life that seem to be strategically planned by a force not myself, when I’m surrounded by strong women right when I need it. Not that there’s anything wrong with dudes. They have their ideal times, too.

But at that exact moment on that river, I was in the company of some amazing new friends, and it did me some good. I have a feeling this is only the beginning of my river adventures.

How are you holding up? We're eight months into the pandemic in the United States, and many aspects of our lives have … END_OF_DOCUMENT_TOKEN_TO_BE_REPLACED

As quickly as it came, summer’s nearly gone. While I’d love to say I’m finally coming up for air from a hectic period of … END_OF_DOCUMENT_TOKEN_TO_BE_REPLACED

Summer Solstice was just yesterday, and yet it feels as if it's been summer for a while now. At least, I've been … END_OF_DOCUMENT_TOKEN_TO_BE_REPLACED