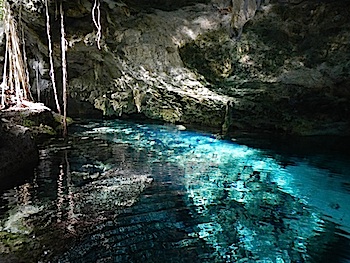 Xibalba, the Mayan underworld, is described in the Popul Vuh as a place of fear where the dead had to traverse an obstacle course of bats, jaguars, rivers of blood and rooms of sharp knives. Cenotes, the deep limestone sinkholes scattered throughout the Mexican Maya world, were the gateways to this hellish underworld.

But the idea of diving into a cenote was nearly all I could think about on my recent trip to the Riviera Maya, that area south of Cancun, through the Sian Ka’an Biosphere—along the Caribbean coast.

I’d just gotten my open water diving certification the day before I found myself driving with my dive guide Jose to the Dos Ojos (two eyes) cenote, north of Tulum. As we readied our equipment, I was instructed how to use my flashlight to signal in case of an emergency, and told that I absolutely had to follow the yellow string line through the cavern, staying behind Jose the entire time.

We were to enter the gateway to Xibalba at the East Eye, follow the line through the Bat Cave, and through the West Eye to what was briefly described by Jose as the “crocodile cave” until I raised my eyebrows. No, he admitted, there were no crocodiles there. Even beyond the West Eye, we’d still be underwater for some time. The entire dive, he estimated, would be 45 minutes.

At the East Eye, the limestone walls were illuminated by sunlight and underwater lighting that caused the turquoise water to glow. I slipped beneath the surface, and everything changed.

For three weeks before that moment, my brain was non-stop chatter. I don’t think there was a minute when I wasn’t working out some problem, trying to quiet errant song lyrics, or writing articles in my head. Even sleeping was problematic without help to temporarily quell the action.

But when I entered the gateway to Xibalba, all my brain could say for those 45 minutes was “ooooooooooo.” The silence in the underwater cavern was far different than the Caribbean, with the whoosh of the tide surging through the reef and the constant clatter of fish. All I could hear were bubbles, signaling my breathing.

My flashlight illuminated stalactites and stalagmites, fossils, huge fissures in the limestone below (perhaps leading to Xibalba?) and tiny fish. Glowing through the water was such a serene shade of blue that I still can’t find the words to describe it.

When we neared the end of the line and approached the East Eye again, I wanted to trace the route backwards to stay within the quiet azure water as long as I could. If Xibalba is a hellish place, the pathway there is quite the opposite.

How are you holding up? We're eight months into the pandemic in the United States, and many aspects of our lives have … END_OF_DOCUMENT_TOKEN_TO_BE_REPLACED

As quickly as it came, summer’s nearly gone. While I’d love to say I’m finally coming up for air from a hectic period of … END_OF_DOCUMENT_TOKEN_TO_BE_REPLACED

Summer Solstice was just yesterday, and yet it feels as if it's been summer for a while now. At least, I've been … END_OF_DOCUMENT_TOKEN_TO_BE_REPLACED