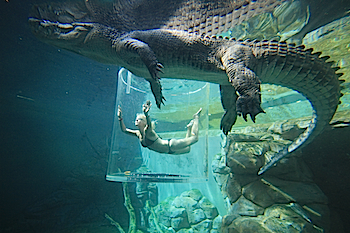 The Perspex cylinder cage was suspended about the pool by three thick metal chains. Goggles in hand, I climbed down the shiny silver ladder and planted my feet at the bottom of the cage, where it skimmed the top of the water. Only 5 feet away was a monster of a saltwater crocodile, eyeing me.

The motor started, slowly lowering the cage into the watery home of a 15-foot, 1,500-pound animal. And I wasn’t scared for a second.

Nearly from the moment I knew I’d be visiting the huge crocs at Crocosaurus Cove in Darwin, Australia, I was excited about the prospect of getting safely close to them. I’d even looked at photos of the clear plastic cage, dramatically referred to as the Cage of Death, and decided that I wanted to try it. But on the plane to Australia, I sat next to a woman who made me doubt my decision for a moment.

“I know that place,” she said. “The cage broke a couple of years ago, but the person wasn’t hurt.”

I wanted to know exactly what happened. Did the cage fall off the chains and sink? Did it open? She didn’t remember the details. (It turns out that one of the chains briefly malfunctioned, causing the cage to sag a little on one side—nowhere close to the disastrous event I imagined.)

On the flight, I had a dream that the cage broke open while I was inside it. The crocodile surged after me, and I woke with my heart racing, wondering if the dream meant I should consider rethinking my desire to be that close to crocodiles.

While there are some extreme animal experiences that get my adrenaline going in a good way, there is one I still struggle with. Merely looking at venomous snakes, even when separated by layers of glass, is guaranteed to get my stomach twisted in knots. I once could barely look at photos of snakes, but have gotten to the point where I can touch the harmless ones. In recent years, I’ve scooted young garter snakes off the street near my home to save them from getting squashed by car tires.

But those ominous-looking serpents with mesmerizing patterns, diamond-shaped heads and deadly venom? I’ll pass, thanks.

Floating in the water, just inches from a saltwater crocodile that could crush me in an instant if we didn’t have thick plastic between us, all I could think about was how amazingly beautiful this animal was. Named Houdini, after his seemingly magical escapes from traps before his life in captivity, he could have been a crocodile model. The white teeth, tapered claws and amber eyes had me constantly diving under the water’s surface to get a closer look.

His eye was less than a hand’s distance from my face, and he turned towards me as I watched him. There were small openings in the cage, and I was tempted to stick my finger out to touch his tough skin, but not that tempted. I wanted to keep all my digits. When Houdini snapped up meat offered at the end of a long pole, his tail whipped into the cage while I watched his jaws slam shut right in front of me. I would have stayed in there for hours if I could.

After a while, I did have to get out of the water and the cage. As I dried off, I looked back into the croc enclosure to say a silent goodbye to Houdini. Feeling strangely confident, I headed inside to the reptile exhibit to see what I could do about my fear of snakes.

Maybe draping a small children’s python around my shoulders after cage diving with saltwater crocodiles seems anticlimactic, but when it comes to snakes and me, every little bit helps.

How are you holding up? We're eight months into the pandemic in the United States, and many aspects of our lives have … END_OF_DOCUMENT_TOKEN_TO_BE_REPLACED

As quickly as it came, summer’s nearly gone. While I’d love to say I’m finally coming up for air from a hectic period of … END_OF_DOCUMENT_TOKEN_TO_BE_REPLACED

Summer Solstice was just yesterday, and yet it feels as if it's been summer for a while now. At least, I've been … END_OF_DOCUMENT_TOKEN_TO_BE_REPLACED